Disaster Recovery has always been a hot topic for business and for the longest time DR was an exclusive feature for those with huge IT budgets and expensive SANs doing replication at the array level.

Fortunately things have moved on and there are a number of purely software-based technologies which bring disaster recovery functionality within reach of even small users; for VMware-based VMs there are many options including pure vSphere Replication, Site Recovery Manager, Veeam and Zerto.

I'm a big fan of both VMware and Amazon Web Services and the lack of any useful product to link these technologies together has often been a point of discussion in client meetings; an on-site VMware solution needs somewhere else to replicate to - AWS should be a perfect fit for this!

At $dayjob we've often quoted customers for just this, it's been based around Veeam backups. However, I have often played through a scenario in my head that would allow regular vSphere snapshots to be replicated to a 'pilot light' environment in AWS using only native tools.

Last weekend, I made it happen.

In my head at least, it's quite straightforward. Take an initial snapshot, replicate it to AWS and then make use of vSphere Changed Block Tracking so that with every future snapshot, only the differences between each snapshot will need to be replicated, thus vastly reducing replication overhead when I need to get that data into AWS!

Step One: Take a snapshot 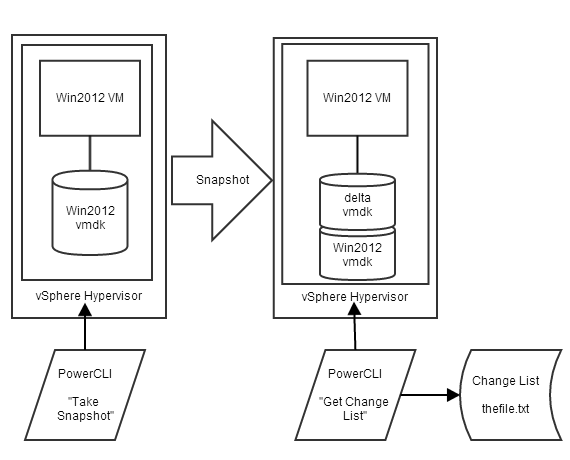 I use VMware's PowerCLI PowerShell cmdlets to connect to the vCenter Server (a single ESXi host should also work) and take a snapshot of the VM I want to protect.

The first time I do this, pass the 'QueryChangedDiskAreas' function a ChangeID of "*" - vSphere knows this to mean 'give me a list of all the active extents for that disk'

Many thanks to Scott Herold, the VMguru for this great post which told me how QueryChangedDiskAreas worked and how to get the ChangeId for the each virtual hard disk!

Scott makes a great job of writing function-based code that handles errors. For brevity, the necessary code can be distilled right down to this:


To give a little context, 'thefile.txt' will contain something like this after running the PowerShell code: 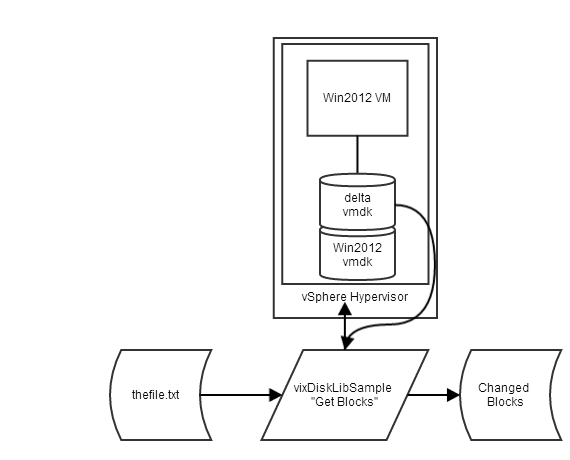 thefile.txt tells us the parts of the disk we should be interested in and we now need to get those bytes. I amended the 'vixDiskLibSample.cpp' sample program which comes with VMware's Virtual Disk Development Kit.

I edited the 'DoDump' function which allowed you to specify an offset and byte count for it to spit out a hex-dump of that portion of the disk. I removed the hex-dump feature and changed the function so it would instead write a series of files to the current directory.

For every line of 'thefile.txt', the DoDump function will now write a file whose name is the byte offset. The length of that file is, you guessed it, exactly the size of the change.


After running the code, you end up with an 'ls -l' output like this:
You should now remove the vSphere snapshot using the PowerCLI 'Remove-Snapshot' cmdlet

Amazon Web Services recently launched a unified CLI tool to bring together a ton of individual tools. This is great news since the configuration and usage for each of those tools was different - you'd end up with a whole stack of Python, Ruby and Java and duplicated configs. Oh dear lord so much Java. I digress.

I create an S3 bucket called 'gdh-vm-replication' in which to store the change sets and then run 'aws s3 sync' to push the changes up:

Now in AWS, I have an EC2 instance with an initially empty directory /tmp/spool. I'm dealing with a 40GiB VMware disk which means 40960MiB (i.e. power-of-two mebibytes rather than marketing megabytes) , so I created a 40GiB sparse file just to get things going:
The instance performs two simple tasks in normal operations:

Using the same 'thefile.txt' as before, the output that gets piped into 'sh' looks like this:

Repeat all of the above steps every 15 minutes, or as often as you wish. The only thing of particular note is that back in Step One when you retrieved the value of $thischange, you must ensure that the NEXT time you take a snapshot, you pass that value into the QueryChangedDiskAreas function instead of "*", otherwise you will be syncing the entire disk each time!

Ah yes. That nice unified CLI I mentioned earlier? It's not quite completely unified yet, so the older EC2 API tools are still necessary :/
I hope they will be incorporated into the unified AWS CLI soon - I logged a support case / feature request about that, since the console output of the ec2-import-instance command is an utter fright - look:

The bucket name 'gdh-vmimport' is somewhere for the ec2-import-instance to store a manifest file which details the S3 location of all of the 4096 10MB chunks of data which AWS will use to 'Amazonify' your disk image.
This will take ages to upload - the 40GiB took approx 45 minutes on an m3.medium. After that, Amazon will boot the instance behind the scenes, install EC2Config and the Citrix PV SCSI and Network drivers.

This takes approximately 15 minutes. That brings the minimum achievable 'Recovery Time Objective' to no less than one hour, which is a bit sucky.

Instance i-760d4437 (mentioned in the output from ec2-import-instance) will be ready to start - you did remember to open port 3389 in the Windows host firewall, didn't you? ;)

All comments welcome - this is a Proof of Concept piece of work and while it works, you'll want to add a wrapper for monitoring, reporting, alerting and configuration.

Here's a patch of the changes I made the VMware's vixDiskLibSample application. I am not a C++ programmer!